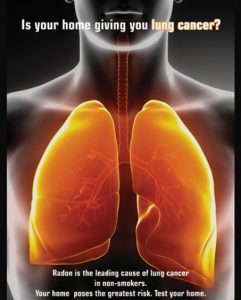 Radon is the second leading cause of lung cancer in the United States. There are an average of 21,000 deaths annually contributed to radon exposure. Sadly radon is the number one cause of lung cancer in non-smokers. A smoker who is exposed to high levels of radon has a much higher risk of lung cancer, this risk can be increased as much as 14x the risk of lung cancer from just smoking alone. Radiation exposure from radon is indirect, the health hazard from radon does not come primarily from the radon itself, but rather from the radioactive products formed in the decay of radon called radon progeny. As discussed in our first post the progeny attaches to microscopic dust particles in our atmosphere and thus can be breathed into the lungs.

Radon is measure in pCi/L (picocuries per liter). This is the standard unit of measurement in the United States, the EPA has set a guideline of 4.0 pCi/L or greater as the action level for radon mitigation. The average outdoor radon level in the U.S. is .04 pCi/L, and the average indoor radon level is 1.3 pCi/L. There is no safe level of Radon, but studies have shown that you are at a much higher risk when exposed to higher levels over time. Research indicates that long term exposure to Radon over 4.0 pCi/L is equivalent to smoking 1/2-3 packs of cigarettes per day. On Friday we will discuss testing methods for Radon, followed by mitigation and recommended mitigation companies on the front range on Sunday.

This function has been disabled for Sherlock Homes.