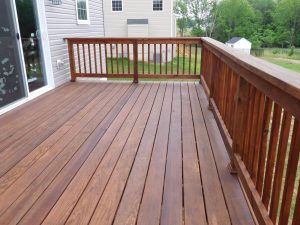 Defined by InterNACHI – “A deck is a large, raised wooden floor attached to the back of a house and may be contained by a perimeter railing for safety. Decks are rarely covered, and usually have a rough or informal look that is not integrated with the rest of the house’s design. They are typically intended to be locations for large outdoor social gatherings, such as barbecues and birthday parties. Access to the deck may be from the ground through a stairway, or from the house through a back door, or both.”

I wanted to drop a quick blog on here about deck construction and safety. More than 2 million decks are built and replaced each year in North America, my governing organization InterNACHI estimates that of the 45 million estimated decks, only 45% of them are built correctly and safely.

This is a scary statistic considering how often we hear of a deck collapse combined with injury or death. More decks collapse in the summer and almost all of the collapses occurred when the deck was occupied or under a heavy snow load.

Which leads to the point of this blog, building a deck is not a job for an amateur. If you don’t know what you are doing, hire a professional or at the very least have it professionally designed so you have the best opportunity of building a long lasting and safe deck.

It must also be designed to resist lateral shifts and uplift loads that can act on the deck as a result of wind or seismic activity. Deck stairs must also be structurally safe and handrails graspable for adults and children. Finally deck rails should be safe for children by having the proper spacing so as not to allow them to protrude their head or body through the space between the balusters and risk serious injury or death. The general rule is 4″ or less.

The greatest majority of failures occur because the deck is not properly attached to the home. The board that connects the deck to the home is called the ledger board. Too many deck builders make the mistake of nailing this board to the home instead of properly attaching it with lag bolts or through-bolts. 16D or even 20D nails are not designed to bear the load a deck will carry, and they can easily pull away from the home. When this ledger board comes loose from the home, the deck sways under heavy loads and will eventually collapses.

Many deaths occur in the U.S. every year because of this. The number one structural mistake we see at Sherlock Homes Inspection & Appraisal, LLC with deck construction is improper attachment of the ledger board to the home structure. One good rule InterNACHI recommends for lag / ledger board attachment is: Lags should be a minimum of 1/2″ in diameter. Spacing of the ledger fasteners may be calculated by this formula (Ledger fasterners in inches = 100 / joist length in feet. Here is a great video from InterNACHI on proper ledger board attachment: http://education.nachi.org/show.php…

The second largest injury happens when the railing fails and a resulting fall occurs. There are not as many deaths associated with rail failures, but there are 2-3 times as many injuries and failures as deck collapse. The number two safety concern we see with decks at Sherlock Homes Inspection & Appraisal, LLC is improperly built / supported railings.

Railings are required in most areas of Colorado for any deck that is 30 inches or higher from the ground. This is one code rule that most good deck builders, framers, contractors, and myself feel is too lax. I personally feel if a deck is more than 12″ off the ground you should add a rail for safety. Many broken legs, ankles, head injuries and so on have occurred from falls from decks that are much less than 30″ off the ground. If you think about it and grab a tape and look at 30″, and your not expecting a fall, it is along ways.

Many decks fail because of improper post and footing installations and design. In Colorado the general rule is footings must be 36″ deep and post should be 6″x6″ treated lumber. At Sherlock Homes Inspection & Appraisal, LLC we see more decks that don’t meet these safety requirements than decks that do.

There are many other structural considerations that amateur deck builders neglect. Joist hangers are required / necessary on the deck floor joist where they abute with the rim plate and ledger board. These simple metal hangers ensure that the structural frame of the deck does not separate or pull away, and they provide necessary additional structural support for where these components intersect.

Railings should be set at proper heights for both children and adults. Post / support locations should be engineered for the size and maximum load of the deck. Deck boards should be properly spaced to allow drainage and air flow which will help the longevity of the wood. Flashing should be properly installed under the homes siding and overlapping the deck ledger board to prevent water penetration to the ledger board and the structural components of the home that it is attached to.

These are some of the safety features in a nut shell you must consider when building and designing a deck, and thus you can see why we recommend hiring a professional. Here is a great article from InterNACHI on general recommendations for safe deck construction and inspection: https://www.nachi.org/deck-inspections.htm

One of the best deck / outdoor structure builders I have had the privilege to work with is located right here in Northern Colorado. Dave Petersen with Outdoor Structure Company is by far a leading expert in both construction and design of decks and outdoor structures. I highly recommend visiting his website and considering consulting with Dave before you start your deck project. http://www.oscdecks.com

This function has been disabled for Sherlock Homes.